A double-bill of Steven Berkoff plays

DOG/ACTOR is a double-bill of comedic short plays by Steven Berkoff, performed back-to-back by the same actor. As part of its tour of the country, the show will be performing at the Corpus Playroom in July. We spoke to Director/Performer STEPHEN SMITH to find out more.

What should an audience expect from Dog/Actor?

A double-bill of explosively energetic plays from Steven Berkoff - full of physically-charged comedic storytelling, plenty of laughs. The show has been described as ‘action-packed’, which is a feat considering there is no set, props or much technical business to compliment the performance.

The show combines two monologues written by Berkoff. The first monologue, called ‘Dog’, follows a day in the life of a football hooligan and his pitbull terrier, Roy (the actor plays both roles!). It’s a bit of a Jekyll and Hyde routine. The foul-mouthed hooligan, and the even fouler-mouthed dog, are at times uncomfortable to listen to, but both are played with utmost conviction and dedication.

The second half of the show is a spoken word poem, written by Berkoff, called ‘Actor’. Written in the mid-1980s, the poem is a tyrannical rant about the acting industry - and still resonates today! The central character is an out-of-work actor who becomes seethingly jealous when he runs into any other actor who is working. The piece, like ‘Dog’, is incredibly physical and requires a lot of mime to convey the story, environment and other characters. 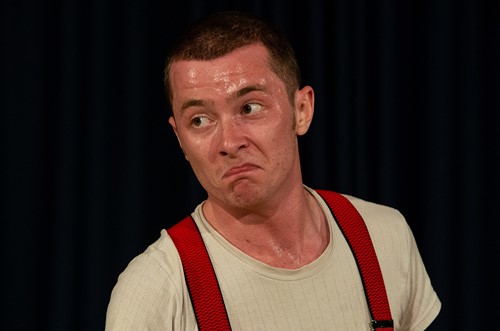 How have rehearsals been coming along?

Great! The show has been performed many times before, firstly in Watford, then London, then Dubai in 2019. It’s been over two years since its last outing, but we have picked up the piece as if it was performed only yesterday. All it needs now is an audience.

We were due to tour this show around the UK in 2020, but decided to scale down our original tour for finally staging the show this summer. We were so impressed by the Corpus Playroom that we decided to keep the venue in our revised tour schedule. The space is perfect for our intimate and hilarious double-bill production.

Without spoiling too much, what is your favourite part of the show?

We enjoy our own additions to the story, which don’t already feature in Berkoff’s original script. By not writing any stage directions, Berkoff gives the performer/director the freedom to add various unspoken and silent-movie-like sequences to flesh out the characters and storyline. The two plays, if read outloud, take approximately 20 minutes to read, therefore our 50 minute show is packed full of comedic storytelling that you cannot find on the page.

One unique addition to our version of ‘Actor’ is the use of a loop pedal machine. The actor loads vocal loops before starting the poem, completely live and in front of the audience, which adds musicality throughout the spoken word poem. This addition really gives the poem a heartbeat and a drive, which is hard to describe here and now - you’re just going to have to come and watch it to see what we mean!