Due to the fact that students are not returning to Cambridge this Spring, we have unfortunately had to cancel all performances at the ADC Theatre until Monday 5th April. If you already have tickets for a cancelled production, you will receive instructions via email on how to claim your refund.

Adapting Virginia Woolf's THE WAVES for the Stage

The ADC Theatre is proud to present one of the first theatrical adaptations of Virginia Woolf's novel 'The Waves'. We spoke to the show's Writer and Director, SARAH TAYLOR, about the show's journey from page to stage.

What led you to adapt 'The Waves' for the stage?

When I read the novel, I felt that The Waves was so fluid and lyrical, and yet so clear and visual, that I couldn’t escape the feeling it would work beautifully as a play. Indeed, Woolf considered the novel a ‘play-poem’ herself. I therefore assumed I would not be the first to have the thought, and so I went looking for a script which I could explore, with very vague intentions of pitching to stage a production it if I liked it. I was somewhat surprised to find no publicly available script exists; The only professional adaptations of which I am aware have been a ballet piece, part of a series called Woolf Works (2015), and Katie Mitchell’s experimental multimedia devised play for the National Theatre, waves (2006). In an uncharacteristically bold move, I decided that, if I couldn’t find a play script of The Waves, I would make one.

Would you say that your adaptation is a "conventional" one, seeing that the original novel is so experimental?

I think my adaptation could be considered conventional insofar as it prioritises plot and interaction, in order to help the audience toward a narrative. That said, it can’t exactly be described as naturalistic; we have aimed to strike a balance between the experimentation of form and the authenticity of character that is in tension within Woolf’s novel by aiming for production elements to be fluid and creative while keeping the performances closer to realism. Of course, there are moments when Woolf’s prose resists such a reading, and we have worked hard on the delivery and direction of the language to delineate the times characters are conscious of one another’s words, and the times the spoken thoughts are more introspective. The audience is in the head of all the characters simultaneously in some scenes, and it’s a tricky positioning to negotiate, but we wanted to replicate the blurred boundary between lyricism and literalism that is so integral to Woolf’s novel. 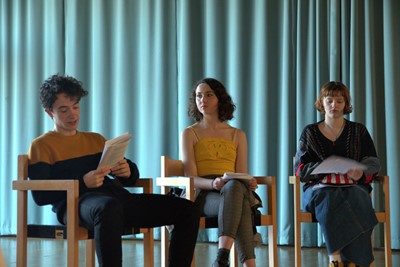 How has the show changed during the rehearsal process?

When I first conceived of the production, there were a couple of key elements which have changed a little for various reasons. The first is that I wanted to represent the interludes by animation; in my script the prompts assume this, but in fact we have Olivia Railton’s wonderful videography in the production, so our interludes are more like abstracted versions of those in the novel - rather than exact representations of Woolf’s descriptive prose passages - with particular focus on the natural imagery, given the difficulty of setting up period interiors for videos. The other thing that has a different life to that which I had initially imagined is the choreography, which I had expected to be performed by a chorus of dancers. Julia Needham has been fantastic with choreographing this production, and this was her idea; we sat down early on and she said, “I don’t think we need dancers, I think we should use the actors.” I immediately liked the idea, and the cast have graciously taken to this challenge. I’m really impressed with what this decision has brought out of both them and the story; having familiar faces playing the everybodies in the movement scenes speaks to the novel’s preoccupation with common experience and indeterminate identity particularly interestingly.

Without spoiling too much, which part of the show are you most excited for the audience to see?

The second section of the play, in which the group have split for boarding school, is perhaps the most moving and therefore most exciting scene in terms of how much is go, but my favourite part of the show is the seventh section; this is about half way through the second act, when each character gets a monologue in which they contemplate their adult lives, the decisions that have led them there, and the changes they have perceived within themselves since their youth. It is the strongest part of the play in terms of delivery and characterisation for all the actors, I think, because for each of them there is a sense of having always looked forward, and suddenly they are looking back to find that life hasn’t necessarily panned out in the ways they might have wished. It’s the most fascinating section of the novel, for me, being somehow epiphanic and yet elusive.