Due to the fact that students are not returning to Cambridge this Spring, we have unfortunately had to cancel all performances at the ADC Theatre until Monday 5th April. If you already have tickets for a cancelled production, you will receive instructions via email on how to claim your refund.

Tony Kushner's award-winning play, ANGELS IN AMERICA: PERESTROIKA, is performing at the ADC Theatre in February. The show's Director, ALISTAIR HENFREY, discusses the context of the show, and the process of creating its magical atmosphere.

‘Perestroika’ is a term used to describe the political and economic reforms made in the Soviet Union by Gorbachev in the late 1980s and early 90s. It literally translates as ‘restructuring’. And this idea of ‘restructuring’ sits at the epicenter of the play; after Part 1, in which the Angel crashes through Prior’s ceiling and the central relationships are broken apart, this play sees the characters attempt to clear up the literal and emotional debris left by Millennium Approaches. It is a ‘restructuring’ because the characters attempt to reconstruct their lives, to adjust to loneliness or to a new relationship, and finally to realise that change is crucial to our development as a species. ‘In this world, there is a kind of painful progress,’ as Harper tells us.

Having already staged Part 1 last year, the creation of the world of Perestroika has been an incredibly rewarding challenge; aesthetically, we have been very interested by the brokenness and mess of the play. Kushner tells us that ‘Perhaps it can be said that Millennium is a play about security and certainty being blown apart, while Perestroika is about danger and possibility following the explosion.’ Already having created a set design for Millennium Approaches, we decided to keep the play in the same world; the set is a similar shape (a U-shape on two levels), it carries over some of the aesthetic components from Part 1 (LEDs lighting particular scenes, etc), but it is a broken version of that set. The safe, secure box structure we established in Millennium has been blasted apart, the stage is messy, and over the course of the play we are allowing props to accumulate. There are four key spaces; a living room, a hospital, a bedroom, and an office, and all of the characters inhabit these spaces – the mess, the props, even the blood that the characters shed into each of these spaces will remain throughout. As the worlds of the characters tangle further together, we are attempting to suggest the imprints these people leave on one another, and the stage space should feel filled with the detritus they leave in their wake. Perestroika is about what can be found in the rubble, and we are keen to make that rubble a forceful presence.

It is important to emphasise at this point, having discussed Millennium briefly, that it is by no means necessary to have seen Part 1 to understand Part 2; Perestroika is a sequel to Millennium, it picks up on the events of the first part, but they are fundamentally stand-alone plays. In their first productions, Perestroika was not staged until two years after Millennium and had an entirely different cast, crew and director. They share characters, there is a continuity of storyline, but the plot reveals itself very quickly. Kushner does an efficient job of telling you all you need to know from Millennium without it ever feeling laborious. Do not be put off from watching Perestroika if you have not seen Millennium; they are different plays, they stand alone, and Perestroika requires no prior knowledge. And if you don’t believe me, this is what Tony Kushner has to say: ‘If the playwright has done his or her job […] the text of the play and the experience of watching or reading it should be sufficient unto itself.’

I personally prefer Perestroika to Millennium; Millennium is lean and confident where Perestroika is sprawling and tentative. This sounds like a criticism but it is not; Perestroika constantly feels as though it is thinking aloud and looking for answers where there may not be any. Kushner was not writing the play at a time where certainty prevailed. To write a play which hands you all the answers about the spiritual, religious, political and personal anxieties surrounding the Millennium would be disingenuous. And in approaching the play, we have been particularly aware of and attentive to these contexts, and the ways in which history seems to be repeating itself. We are seeing a resurgence of right-wing governments, a lack of attention towards minority groups from the top of the political system, and a willful ignorance towards global crises. On the day I’m writing this, the Church of England recapitulated its stance that marriage only exists between heterosexual couples and that civil partnerships are ‘to affirm the value of committed, sexually abstinent friendships.’ And Kushner’s early concerns about holes in the ozone layer are yet more haunting given the mass-media coverage of the impacts of the climate crisis in Australia. This play is absolutely rooted in the world of Reagan’s America, of the AIDS crisis, of the birth of ‘true democratic socialism’ in Russia, and yet is also startlingly contemporary. A world on the brink of global crisis, a world in which it seems easier to give up than to fight forwards, and a world bombarded by insidious political rhetoric is not in the least unfamiliar. We are still in the world of Angels in America. 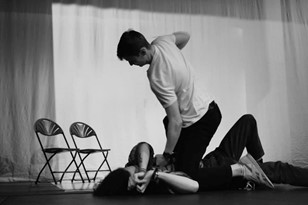 And the ‘weirder’ elements of the play, the Angel, the dream sequences, the ghost of Ethel Rosenberg, the components which make it a magical realist drama, are not just zany window-dressing. It is a play about the scale of crisis; Prior being abandoned by Louis is directly aligned with the Angels in Heaven being abandoned by God; the AIDS crisis is aligned with the death of Heaven; the restructuring of the characters’ private lives is aligned with Russia’s political restructuring. When the Angel bursts through the ceiling at the end of Part 1, it suggests that the intrusion of the supernatural is the only way to fully explain the extent of Prior’s personal crisis and the scale of the AIDS crisis more broadly. The personal crises are as huge as the political crises, and the political crises are as personal as the characters’ struggles. And the continued presence of the supernatural in Part 2 insists that a naturalistic play cannot fully express the feelings of these characters or contain the reach required by such a thematically searching play. Kushner’s America felt so unfamiliar, so new, so dangerous, he felt that he was writing ‘perched on the knife’s edge of terror and hope’, that the only language suitable to communicate the realities of the situation is a language of magic and supernatural.

All that remains is to say that Prior’s call-to-arms at the end of the show should not be seen as confined to Kushner’s original audience; the idea is still as fresh now as it was then. No marginalized group should be dying in silence, the death of our planet should not be falling on deaf ears – it is a genuine plea for action from Tony Kushner (and from us) to you, the audience. Kushner does not imply that change is ever easy, but he insists that it is absolutely necessary. And, if we want change, we must not wait, we must act.

Angels in America: Perestroika is performing at the ADC Theatre between Tuesday 11th and Saturday 15th February at 7.15pm