NOT EVEN THE DOGS Rehearsal Diary 1

NOT EVEN THE DOGS is a show based on the true story of Jewish archivist Emanuel Ringelblum, which is being devised from scratch over the course of this term. We caught up with the show's Director, JOSH BAUMRING-GLEDHILL, to find out how the rehearsal process is going so far.

We’re currently working with a multitude of exciting and interesting resources to help craft the world, feel and atmosphere of the play. We’re using academic historical texts that discuss the Warsaw Ghetto and Emmanuel Ringelblum as well as translated primary sources from the time such as Ringelblum’s journal and a compilation of various translated poems and songs.

We have been lookong at the representation of the Holocaust in other projects, particularly films such as Schindler’s List and The Pianist and drawing on those for inspiration regarding how to create strong empathy as well as criticisms of those films and their lack of Jewish agency.

Additionally, we have focussed on the methods of various theatrical practitioners and have been using some of their methods to help fuel the devising process. In particular, we’ve been looking at LeCoq’s idea of ‘toute bouche’ and using exercises that allow our bodies to get more in tune with each other, trying to sync up our movements to various pieces of music. We’ve also had a look at some Berkoff, especially his idea of the ‘Bouffon’ to help inspire ways of depicting life in the Warsaw Ghetto and the distorted representation of the Jews in Nazi propaganda.

However, perhaps our favorite piece of inspiration is the use of Jewish music in rehearsals whether that be some funky Klezmer and Yiddish dances or more somber pieces like Ernst Bloch’s ‘Prayer’ or the ‘Hatikvah.’ The cast and crew have really enjoyed listening to these pieces and using it in our own renditions of traditional Yiddish music. 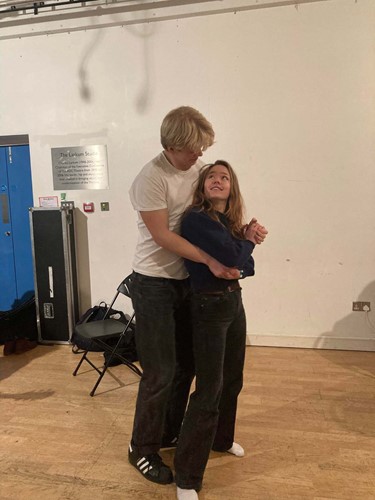 What do you expect will change about the project over the next few weeks?

I imagine a hell of a lot. Right now we’re focusing mainly on form, structure and the dramatic rules of the play. However, this means the dialogue in particular is in a state of flux and without seeing the whole thing put together, we may need to add more or less dialogue. Also, as Ringelblum’s history is incredibly complex, without seeing the whole thing put together it’s unclear as to whether the show explains the history well enough yet. We’re trying to avoid needless exposition as much as possible and trust that the audience is intelligent enough to work out what’s happening. However, perhaps we are looking at the show with tunnel-vision and may realize that we may need to explain more explicitly what is going on!

Whilst this piece is suffused with tragedy and suffering, I’m particularly excited to work on those scenes that celebrate Jewish life, culture, traditions and incredible resilience in the face of certain death. In particular, next week we’re working on a montage that demonstrates Ghetto life and I’m really excited to show Jewish agency, despite the horrific circumstances, and how they continued to laugh, sing, write and express joy even in the most awful conditions.