While we remain closed to the public due to the COVID-19 pandemic, we are celebrating the fact that drama has been performed at the ADC since 1855, by sharing 18 (and a half) interesting facts about the Theatre.

As part of this, we would like to encourage our patrons to donate £18.55 to support the theatre during this difficult time. The ADC Theatre receives no regular public funding or financial support from the University and relies on ticket sales and the generosity of our patrons to fund our operations.Your generosity will help strengthen our financial position and allow us to continue delivering high-quality shows and provide excellent training opportunities to our students as soon as we can re-open. You can donate £18.55 here.

If you look upwards while walking down the stairs leading from the auditorium into the yard, you will notice a lion painted against a blue background, just underneath the skylights. 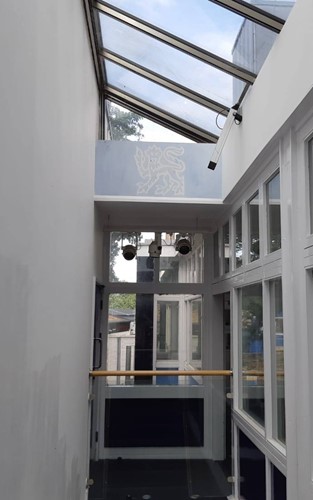 This lion is unique for a couple of reasons. Firstly, it is the only remaining part of the building still painted in that particular shade of light blue. Most of the walls in the ADC used to be painted in this shade of blue before being changed during the refurbishment.

This wall has remained untouched, both out of reverence for the lion and the fact that the wall is incredibly difficult to reach without a very precarious use of ladders!

But why is there a lion symbol? Eager-eyed people might notice that it resembles the lions found on the University of Cambridge's coat of arms. People who have performed on the ADC stage might know that this lion is the symbol for the Cambridge University Amateur Dramatic Club (or CUADC), the resident student society for this Theatre: 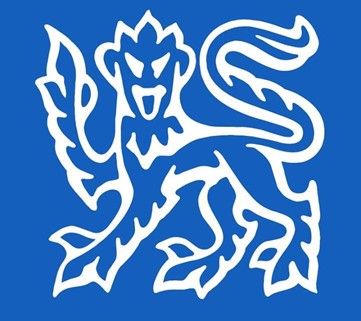 This lion has had many names over the years, but it's most recently been affectionately named '"Rory".

The lion on the wall of the ADC Theatre was painted by Claire Butcher, who was the Designer on the CUADC Committee between 2006 and 2007, and the first Production Manager between 2008 and 2010.

This is the spiral staircase that leads from the Yard of the ADC Theatre to its Bar Terrace. During the evenings when the Bar is open it is frequently used as a way to enter and exit the Bar.

The ADC has not always had this spiral staircase. It was replaced during the building redevelopment in 2003-04... by complete accident.

How do you accidentally replace a staircase? Well, during the redevelopment the old spiral staircase was removed and taken to a storage site. When it came to putting the staircase back, it could not be found, and a new, custom spiral staircase had to be built instead.

What happened to the staircase? Was it lost? Stolen? This is just another mystery in the ADC's rich and strange history...

The ADC Theatre contains a lot of keys, which open various strange locks found around the building. But only one of these keys is called a haunted key. 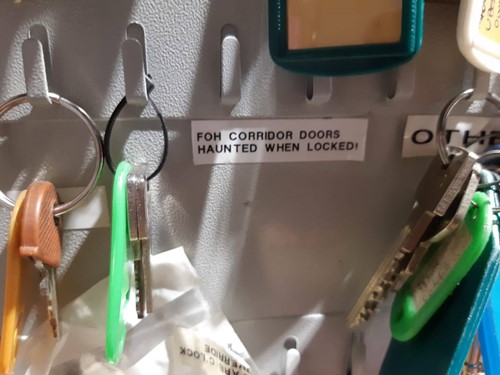 The haunted key is that to the original front doors of the ADC Theatre, which survived the disastrous fire of 1933:

These doors were then relocated to the Front of House corridor when the Theatre was rebuilt: 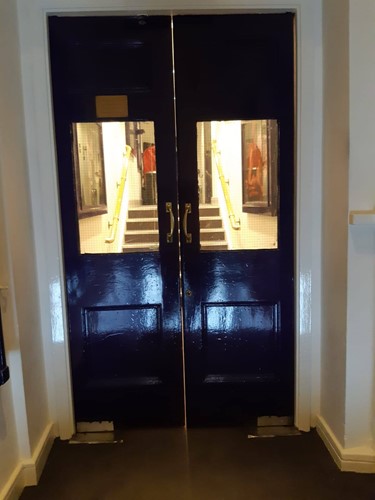 So why is this key haunted? According to urban legend, when the Theatre burned down in 1933, there was still someone trapped inside...

Ever since, the Management of the ADC has been too afraid to lock these doors, for fear that they will be haunted by the ghost.

Around the time that the ADC Theatre closed for lockdown, the current Manager tried bravely (or perhaps foolishly) to lock the haunted doors, only to find that a slight misalignment in their heights meant that they could not be locked.

Is this simply a mistake in the way the doors were hung... or the intervention of a supernatural force?

Drama has been performed in the ADC Theatre since 1855, although the building has not always been called the ADC. The Cambridge University Amateur Dramatic Club was formed in 1855, and operated in a back room of the Hoop Inn. As the Club grew in popularity, the building gradually transformed from an Inn and Hotel into a Theatre, and there have been so many redevelopments and refurbishments that no visible vestiges of the original building remain…

…Except one. This archway and pillar, which can be found inside the ADC’s Management Office, is part of the original building. In fact, the arch was once part of the stables for the coaching house. 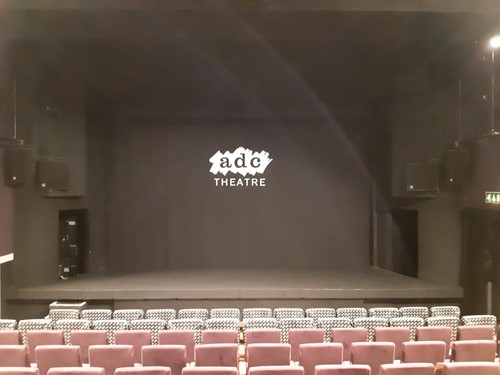 If you have seen a show at the ADC Theatre, you will probably recall the large metal curtain that rises up from the stage during the interval.

This is a safety curtain. All sufficiently large theatres in the UK must have one of these: in the event of a fire, the safety curtain prevents it spreading from the stage to the auditorium, or vice versa. But the ADC's safety curtain is unique in the country in that it rises from the floor rather than lowers from the ceiling. There are other theatre safety curtains, like that at the Barbican or Lyttelton, which are split in half with one half going up and the other going down, but the ADC's rises fully upwards from floor to ceiling. 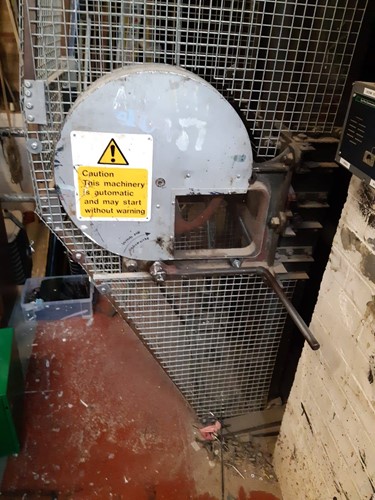 It might also surprise you to know that the ADC safety curtain is not controlled electronically. Instead, an intrepid student winds it downwards using a handle (pictured above). When the brake is released a counterweight system allows the curtain to rush upwards. Although its elements have been repaired and replaced, the core mechanism of this curtain is the same as it was when it was installed in the early 20th century. 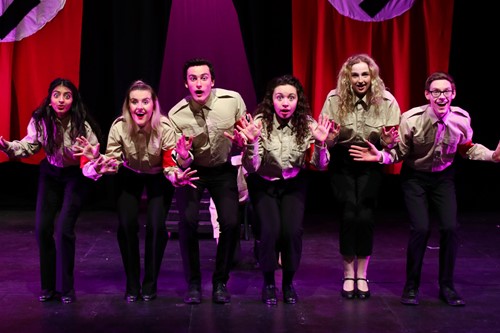 The safety curtain lies at the heart of the ADC and is commonly part-jokingly considered to have a mind of its own, with a particular fondness for unexpectedly rising during particularly vigorous tap numbers (such as the 2018 production of The Producers, photographed above by Evelina Gumileva).