Angela Perlmutter, previous secretary and president of CUADC, recalls her memories of the theatre in the few years before its management was taken over by the University of Cambridge.

I have so many memories of the ADC Theatre during my years at Girton – the final years before the Theatre was taken in by the University. Indeed, there were times when I was spending more time at the ADC and in rehearsal spaces as in my College room way up Huntingdon Road. Certainly more than in the Geography department… The ADC theatre people gave me an open hearted welcome and it seemed like my new home - a greater contrast from Cornish rural life and grammar school would have been difficult to find.

Starting in an ADC Freshers one act Christopher Fry play in Autumn 1968, I ended up as Secretary and then President of the Club. I acted in many productions, often undertook front of house duties, worked in the bar, met potential sponsors, chaired meetings and even organised accommodation at the Edinburgh Fringe Festival for the ADC/Footlights/Cambridge University Theatre Company. (All challenging tasks in later life seemed simple in comparison to the latter!). Under the auspices of the ADC theatre I met many very talented people; actors, directors, set builders, lighting and sound technicians, stage managers, and musicians – even the occasional millionaire.

My favourite ADC Theatre memories are of the camaraderie and quirky humour of the technicians, whose expertise I could only admire but not emulate. I often stayed late into the night for strikes and set ups on Saturday/Sundays. I was honoured to be nominated as an honorary Shaft of Darkness member in the very first years of that organisation, founded in 1969. I remember the technicians with great respect and affection – Rick, Mike, James, Tony, Martin, Rob, Peter, Elwyn, Ralph, Paul and Martin and many more. Yes, they were all male – 85% of Cambridge undergraduates were male in those days. 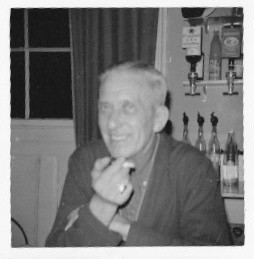 The late Albert Bishop in the ADC bar – a real charmer and stalwart of the ADC.

Those technicians, caretaker and sole employee Albert Bishop, and Senior Treasurer Geoff Skelsey were the people who kept the theatre going through very difficult financial times before the theatre became part of the University. All work on productions was completed by students who chose the productions (many from other CU societies like the Mummers and Independent Theatre group), built the sets, set and operated the lighting rigs, made the sound effects, publicised performances and tried to raise funds.

Working (voluntarily!) in the bar was another great experience as was front of house duty as it gave the opportunity to watch all the shows for free, usually on the opening night when there were smaller audiences and less pressure on the bar.  Decimalisation week was great fun – we had special money trays for the new coins and held several “rehearsals” before the currency became legal tender – 15 February 1971…

Part of an ADC poster for "Entertaining Mr Sloane", fortunately I have no picture for "Kath"!

I suppose my favourite ADC production was of Joe Orton’s “Entertaining Mr Sloane”, a four hander directed by Bill Allan (later President of the ADC), with three Pembroke “boys” and me.  Richard McKenna (later President of Footlights) was a perfect controlling and devious Ed.  Patrick Scott was a very attractive but very hard edged Mr Sloane and Pete Milroy an extremely convincing grumpy old man.  My performance as Kath was described by the Cambridge Evening News critic as “floating around like an ogress on heat”.  Could have been something to do with my less than svelte figure, the transparent pink negligee and wafting air freshener… I took it as a compliment!  We presented that play three times, twice at the ADC – (the second time to fill a dark week in January) and also at the Oxford Playhouse.  The huge stage and auditorium was quite a stretch after the 200 seater ADC.

The ADC theatre was pretty threadbare and grimy in those days, especially the dressing rooms, but I grew up there and I loved it.