Student performer, former president of Fletcher Players and two time panto dame, Tom Nunan, reflects on the experience of being part of a show that was cut short due to the current pandemic.

Catch up with part one here!

After a late night (or early morning? It’s never clear in the ADC), we reach Sunday. It’s the day of rest in the middle of the run, normally a chance to rest your voice and get a bit of space after being encased together in the theatre all week. This time around, though, we discovered that far from being sick of each other’s company, it was a pretty necessary coping device. The only thing going on for us outside Guys and Dolls was the news, which was getting more serious daily. So that night, our one free night to do whatever we wanted, we spent together. Packed into a college room, it was the only time all day we didn’t think about what was going on outside. In an increasingly empty Cambridge, the people we all turned to were each other.

Roll on Monday, week 2 of our run. Frankly we had made it further than we expected if you’d asked us on Friday 13th. The University was on the brink of shutting down, and government announcements were getting more and more stringent. By this point, we were all pretty reconciled to our last show being imminent. Like a game of Russian Roulette, the final show became increasingly likely the longer our run lasted.

That morning, the theatre announced that Tuesday would be the final night, giving us two more shows. Oddly, it was a reassuring announcement. Finally, we had some certainty at a time ridden with uncertainty. We came into the theatre for the day, and set to work at rehearsals. Losing a key dancer and our DSM [Deputy Stage Manager] in a show with lots of musical numbers and lots of cues left a fair few gaps to plug. Of course, a Herculean team effort pulled everyone through. But for once we didn’t enjoy the added stage time and responsibility. It is hard to reconcile performing the part of someone who wanted to be there (and who we all wanted there) but could not be. The same could be said for our DSM, who usually made his role a performance of his own. Our band were disbanded: it was impossible to safely put up to 20 musicians in a small studio together. Saturday’s audio was recorded; the band members would be watching from the audience rather than playing from the pit. So, with the gaps in our depleted team plugged, we were ready for our show.

It was at this point that the outside situation hit home. Between these rehearsals and curtain up, the Prime Minister advised the public to stay away from crowded indoor venues. He explicitly urged people not to go to the theatre, just two hours before our show. With this, a week since coronavirus was only at the back of our minds, it became clear that Monday’s would be our last show. The only question now was who would actually turn up to watch? 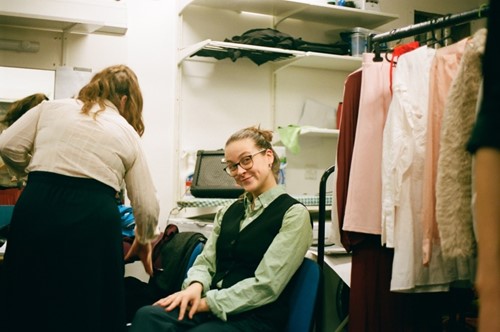 Katie Devey as 'Harry the Horse'

But, as we finished our final warm up in the dressing room, we turned to the stage monitors to see the audience filling up. People of all ages, despite the anxieties, coming along to watch this show. For them, as for us, this was one last chance for a theatre fix. So it was our responsibility to give it to them. When we stepped onstage, it became clear they were here for a good time. The ADC auditorium was less than half full, but that audience remains one of the most raucous I’ve experienced there. As a musical comedy, Guys and Dolls is at its best when fuelled by applause and laughter. There was no shortage of that. Just as we had used the show and each other as a way to escape our anxieties about the news, our families and ourselves, the audience had come to just enjoy the show.

Theatre can be a wonderful form of escapism, a way to jump into someone else’s lives and worries and hopes. That never felt truer than Monday 16th March in the ADC, where our small but defiant group of theatre-lovers sang, danced, laughed and cheered their way through the night. It would be too lofty to call a student production a public service. But there is some merit to saying a bit of entertainment was what we all needed.

It was an unspoken understanding that this show was our last. Four more cast members would have to leave before the Tuesday show. That, combined with Monday’s announcement, finally put an insurmountable barrier in our way. We closed our run the only way that seemed appropriate: a midnight Mamma Mia sing-a-long. A cathartic onstage dance to the end credits topped off a night of quite tearful goodbyes, both to team members and the show itself. All to the backdrop of Pierce Brosnan’s SOS. On second thoughts, maybe that’s why we were crying…

When we met the next day, we officially decided as a group to call it a day. We’d gone out on a good note the night before, successfully making it to the end of the sixth performance of our thirteen-show run. Although bittersweet, coming to this decision at 11am meant we could have an all-day get-out. For those unaware, this is a luxury akin to an all-day breakfast, as get-outs are tasks normally consigned to the anarchy of the small hours of the morning. And of course what follows an all-day get-out, but an all-night party. Before we could finally sign off, we had one last ADC task to perform. We took on the greatest responsibility of them all: cleaning the bar out of alcohol before business closed. Theatre is so often a subjective business; however, in this final mission we achieved objective success.

And that was the end of that. Finishing a show is always tough; saying goodbye to the people you do it with can be the hardest bit. For the finalists among us, it was the memorable goodbye to Cambridge Theatre we never predicted. And with no Easter Term, it meant our final Cambridge moments were spent on that stage with that bouncing safety curtain. How apt.

It’s fair to say it didn’t go according to the script. But theatre’s always more fun that way, right?